A Quest to Improve My Translation Skills

Hello, my name is Joel. I’m an in-house translator at Brainwoods. I moved to Tokyo from the UK almost exactly 4 years ago.

Today I’d like to talk to you about my new hobby.

For the last 3 months I have been playing Dungeons and Dragons (DnD). Some of you may have heard of this from the TV show Stranger Things, in which the young characters liken the terrifying creatures they face in real life to monsters from the game.

In DnD, players take on the role of classic heroes such as warriors, wizards, monks or clerics, and sit around a table to tell a story together. The gamemaster narrates the scene, we players describe our actions, and dice determine the outcome. In my recent game, we were tasked with recovering a powerful magic item and destroying a rogue automaton. We promptly set about gathering clues to track down the whereabouts of our quarry. This lead to the infiltration of a corrupt politician’s manor through the sewers and a deadly battle with their hired thugs and finally the automaton itself. Not only do I enjoy the camaraderie of working together with the other players at the table, but smashing the automaton with my warhammer while dodging magic missiles from evil mages makes for great stress relief!

As I live in Japan, I play in Japanese with Japanese players. This is a great opportunity to improve my language skills as well as flex my creativity — both of which are essential for creating quality translations. In addition to following and participating in the conversation of the six others at the table, I have to contend with an array of words that don’t come up in daily conversation. 隠密 (stealth), 説得 (persuasion), 下水道 (sewer), 呪文 (spell), 魔力 (magic power), 屋敷 (manor) and more. Although these words are not exactly useful in my daily life — or around the office — they do come up in translation work occasionally, and expanding one’s vocabulary is never a bad thing.

If you are interested in playing a TRPG yourself, I’m sure you’ll find a group to join at a nearby hobby shop. I play in the geek mecca Akihabara, which is around 20 minutes from our Omotesando offices. And for all your translation requirements, from the magical to the mundane, contact Brainwoods. 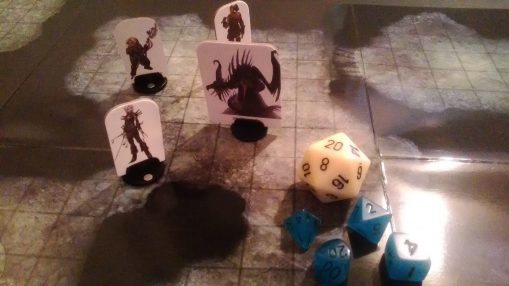 A trio of heroes have tracked a black dragon to its cave lair. To the right you can see the polyhedral dice used to determine the outcome of combat.